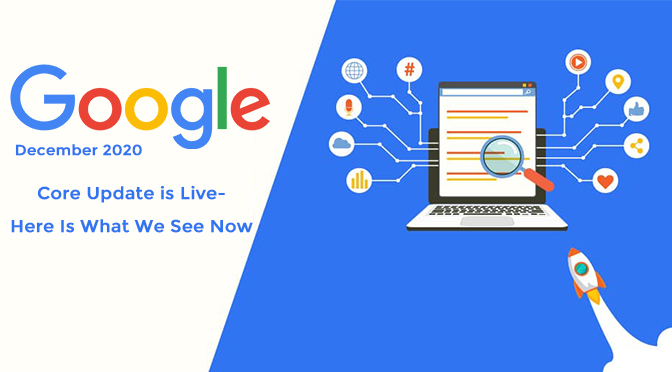 Seven months ago, in May 2020, Google had announced its last core updates. Ever since the pandemic broke out and things got rough for many worldwide, professionals in the digital marketing realm thought that this was probably the final core update for this year. With only a few days left for the year to end, it was obvious for everyone to think that the next core update from Google would come now in 2021.

The surprise Christmas gift was announced and rolled out by Google on 3rd December 2020. The broad core algorithm update is named the December 2020 Core Update. The official handle of Google took to Twitter to announce the rollout. The handle mentioned that though the rollout had started on 3rd December, it would take about one to two weeks for the complete rollout to happen. Truly a Xmas gift, the rollout would finish off by the time the final week of the year is here.

It is the third core update announced this year. Before the official announcement came through, there were signs that this update could be substantially more impactful than the earlier one.

Websites felt the effects of the last update in May all across the domain within the first 24-hours. It took about two weeks approximately for the full-blown impacts to be felt by almost every site.

Any Google core update remains the talk of the town for a long time to come. The bad timing of the December Core Update is also being viewed quite agitatedly amongst the SEO community. The timing is not so right, for sure! Christmas is around the corner. Black Friday and Cyber Monday have passed. To top it all, this is 2020, which has seen many upheavals already. The last thing website owners and the SEO community wanted was an upheaval in their site rankings!

Before we move onto understanding the effects being felt by the top websites due to the updates, here are the key takeaways:

Google says that different sites will face a different type of issues. Some of the sites will experience recovery as the core updates get fully implemented. However, suppose the site is experiencing negative effects due to the December Core Update rollout. In that case, SEOs and site owners must keep working on the content and SEO practices to enhance the content.

Towards this end, Google says that such site owners and their SEO advisors need to:

Effects on Rankings felt in the short-term ever since the updates were announced.

Google algorithm updates are done almost daily. Most of these changes are barely conspicuous. Sometimes, however, the changes are much more than noticeable – they are announced by Google so that concerned stakeholders like webmasters and owners can act or respond relevantly.

As the December 2020 Update, core updates contain a substantial amount of broad changes in the algorithms. The purpose of the core updates is to enable Google to remain synced and aligned to its mission to offer authoritative and relevant content to users. Such updates impact sites notably. Core updates are about improving the overall system of assessing content and is not targeted at any particular site or page. Sites that are negatively affected by such updates should not conclude that there is anything wrong with their site, or, there are any issue needs to be fixed. Many a time, there is nothing to fix at all.